The OPC Router is a unique software application for data exchange. Using special OPC Router plug-ins, you can connect tens of disparate systems and devices.
Manufacturer

The OPC Router is a program that allows you to interconnect various industrial devices and IT systems. You no longer have to exchange data via all kinds of communication interfaces or purpose-built applications.

You can now do it through a single program – the OPC Router. Fast, easily and without any programming skills. You can see all data transfers in a user-friendly, graphical form. Data transfers between systems are either automatic or condition-based. In addition, during the actual transfer the OPC Router allows data to be mathematically processed.

Digitalise Your Processes with OPC Router

The OPC Router enables you to optimise and digitalise your production processes. Data is automatically exchanged by integrating systems such as OPC UA, OPC DA, SAP, MES, ERP, SQL, MQTT, REST, SOAP, Excel, labellers and so on. The OPC Router features graphical, drag & drop configuration, exemplary monitoring and extreme reliability, paving the way for your Industry 4.0.

What Systems Does OPC Router Interconnect?

The OPC Router can communicate with the following systems and protocols (i.e. interconnect them): 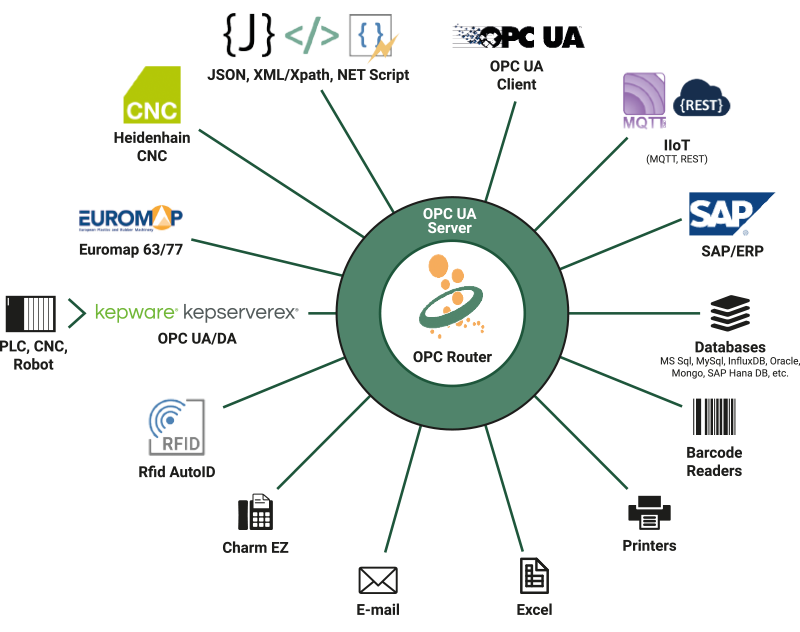 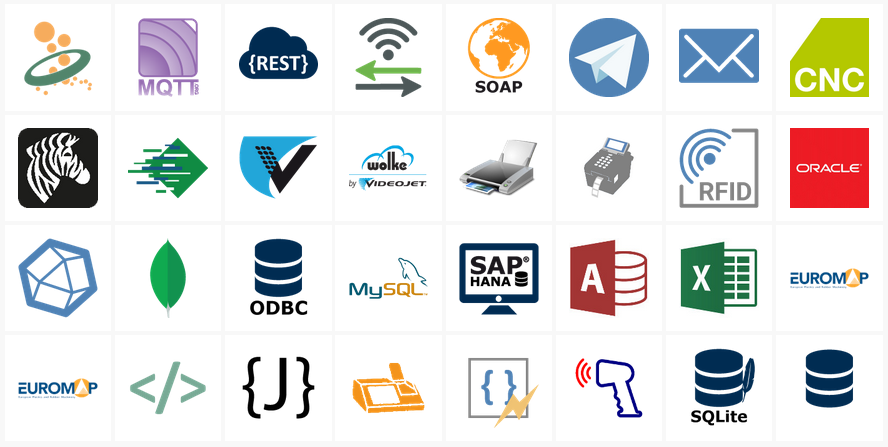 The OPC Router acts as OPC client, supporting the OPC UA and OPC DA protocols. Used at all automation levels, the OPC protocol is a common language that enables various hardware and software systems to exchange data. With the OPC Router, via an OPC server, you can read and write data from / to PLCs, CNCs, robots and hundreds of other devices. The OPC Router also allows you exchange data from all of these systems, save it to various databases or provide it for MES, ERP and SAP systems.

The OPC Router is great accessories for those who work with KEPServerEX from the company Kepware. With over 150 supported communication drivers, KEPServerEX enables you to connect to PLC and other systems and convert their data formats to the OPC DA/UA protocols. When standardised, this data can then be transferred to the OPC Router for further processing, via OPC Router's OPC plug-in. 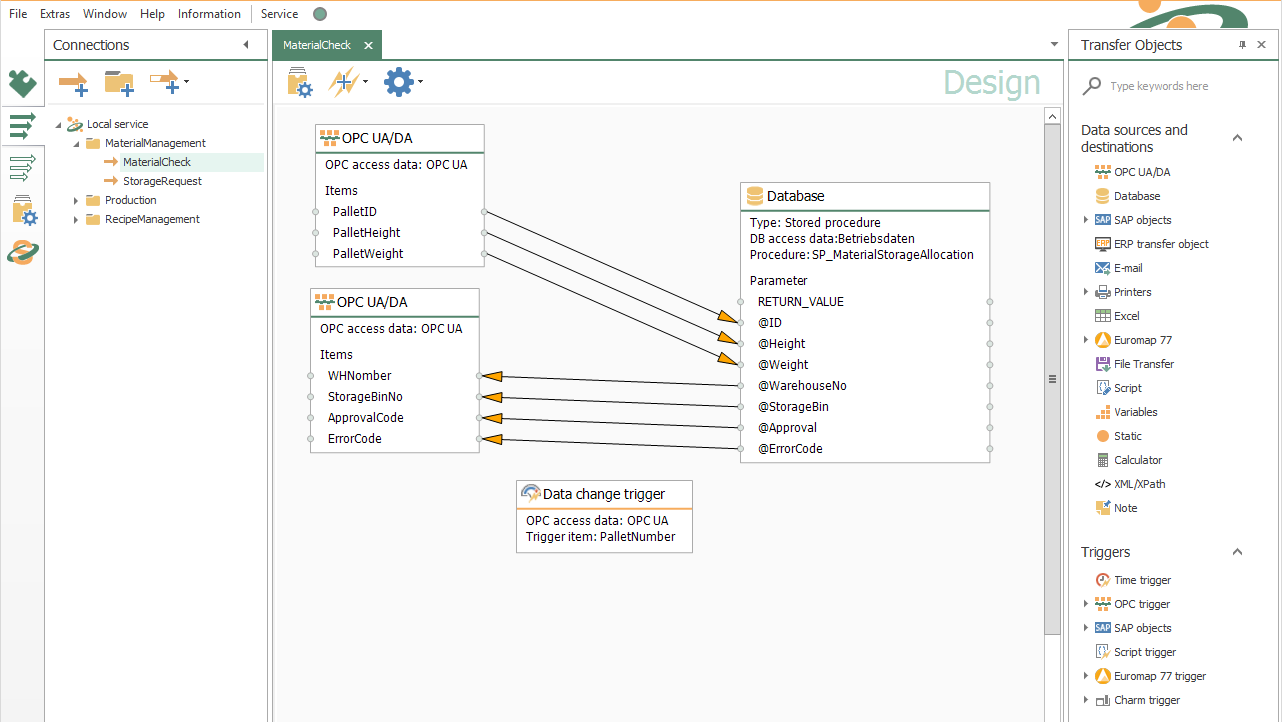 The SAP is one of the most popular ERP systems worldwide. The OPC Router's SAP plug-in allows you to connect to SAP systems, version R/3 4.5 and later. On the SAP-side, communication takes place via standard interfaces or individually created BAPIs, RFCs or IDocs. Using other OPC Router plug-ins, SAP data can be transferred to other systems. It can also be sent from one SAP system to another. To configure a SAP connection, you do not need any programming skills. You can do this simply by using the OPC Router's graphical interface and its drag & drop function. Customers often use the SAP plug-in together with the OPC UA/DA plug-in. This combination allows you to transfer data from PLC / MES systems directly to the SAP. To get an idea of how to do this, watch this YouTube video.

The MQTT protocol is a protocol that is often found in IoT projects. MQTT communications are based on the publisher/subscriber communication, facilitated by the so-called broker. As the OPC Router can receive as well as send MQTT messages, with its MQTT plug-in you can develop versatile edge computing and cloud applications. Thanks to the OPC Router's integrated JSON functionalities, data content of MQTT messages can be ideally processed or generated from other data.

Most IoT and cloud platforms use the MQTT protocol as their primary interface. The OPC Router with its MQTT plug-in enables you to connect IoT things to the cloud, with data transfer between them possible in both directions. Using other OPC Router plug-ins, cloud platforms can be connected to such systems as control systems, SQL servers, SAP systems, printers and other systems and devices. 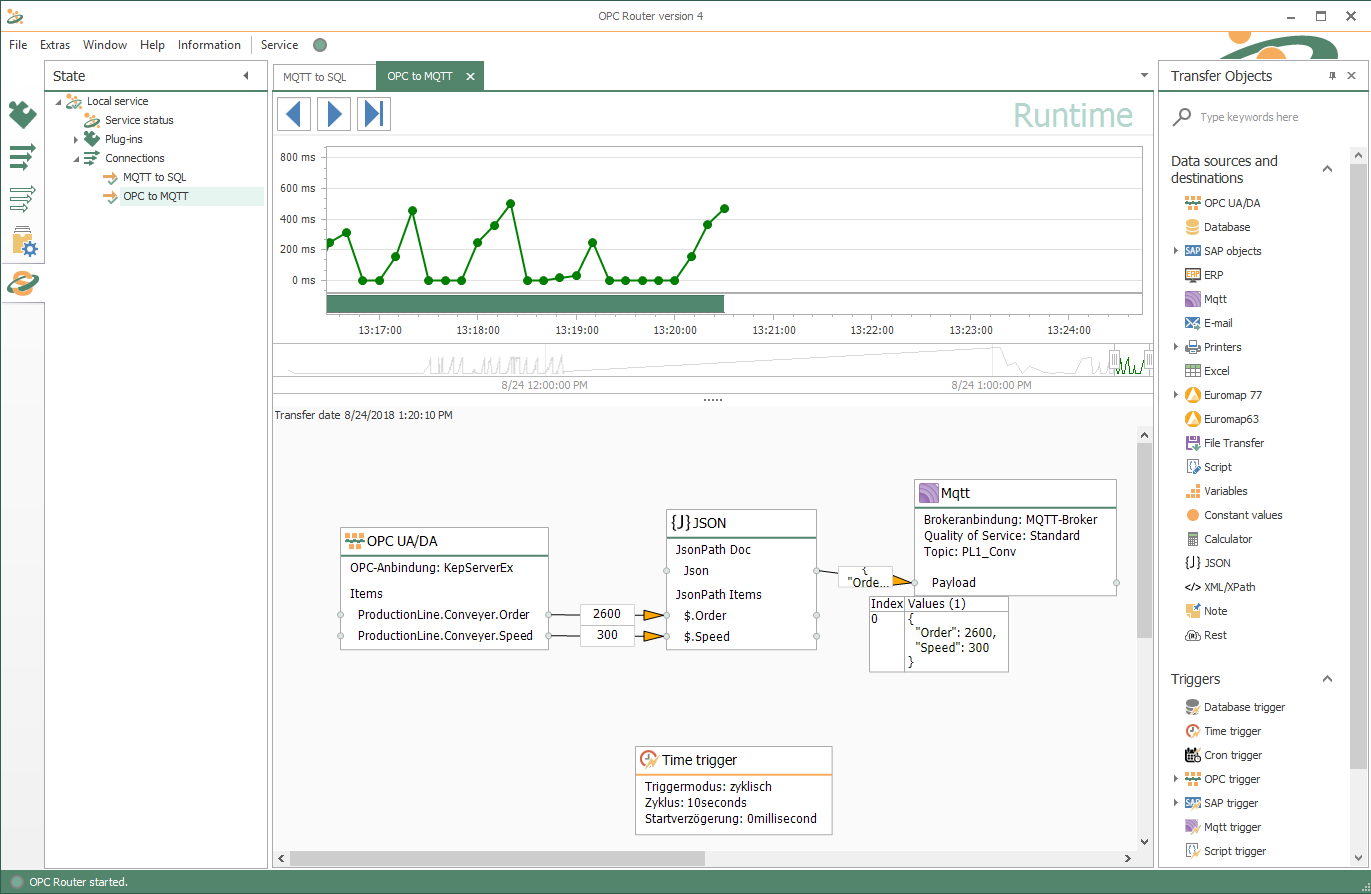 Databases are an important source and target for data at various production levels. Production processes must be provided with ordering information, recipes and machine data. Large amounts of data are generated and must be stored.

The OPC Router is a middleware application that connects databases to other systems and thus drives the idea of IoT and Industry 4.0. It features plug-in modules for these databases:

The OPC Router is a tool that your data collection system can be built upon. Using the OPC Router's plug-ins, you can aggregate data from various systems (e.g. PLCs, RFID, databases, Euromap, XML, barcode readers, etc.) and send it to MES / ERP systems.

Email is still the quickest and easiest option for distributing information to users. With the OPC Router, you can create emails, customise their contents with data from various sources (e.g. PLCs, databases, ERP/MES systems, etc.) and set conditions under which they will be sent (triggers). Emails are sent via the SMTP protocol.

Through your mailbox, you have real-time access to important error messages, consumption values and production figures. 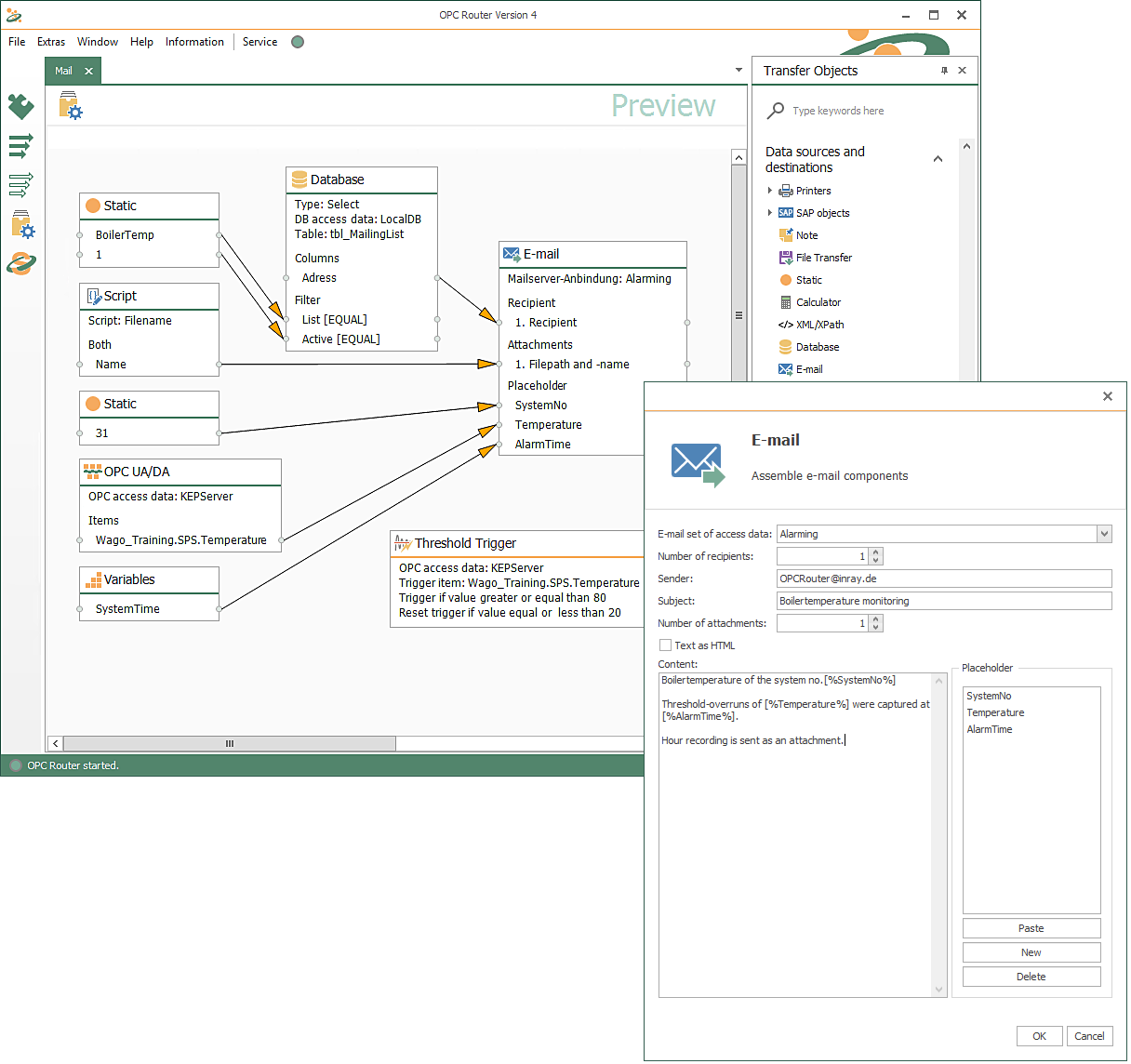 What Are Transfer Objects, Trigger Functions and Browsing?

Below you can find the essential OPC Router functions, which you will use when configuring data transfer connections. Apart from these functions, you will also encounter some special ones, depending on the plug-in you use.

Easy browsing also makes data field configuration easy when establishing transfer objects in order to establish the required interface connection. The browsing mechanisms may vary, depending on the plug-in.

Many plug-ins that are available for the OPC Router offer easy search and selection tools for quick identification of required data fields without the need for specific knowledge about inherent subsystems. The user can easily browse through data. Data source structures may vary according to the specifications of each plug-in.

The OPC Router is ideal for those who already use KEPServerEX or other OPC servers in their projects because it brings a new dimension to them. Both of these platforms can exchange data via the OPC UA protocol. In terms of hierarchy, KEPServerEX is below the OPC Router because its biggest strength is its ability to collect data from disparate control systems and convert all the various data formats to a standardised protocol, in this case the OPC UA protocol.

Above KEPServerEX you will find the OPC Router, which collects standardised data from KEPServerEX via the OPC UA and then converts it to the languages of such systems as MES / ERP, SAP / SAP HANA DB, databases, MQTT, printers, email and many others. 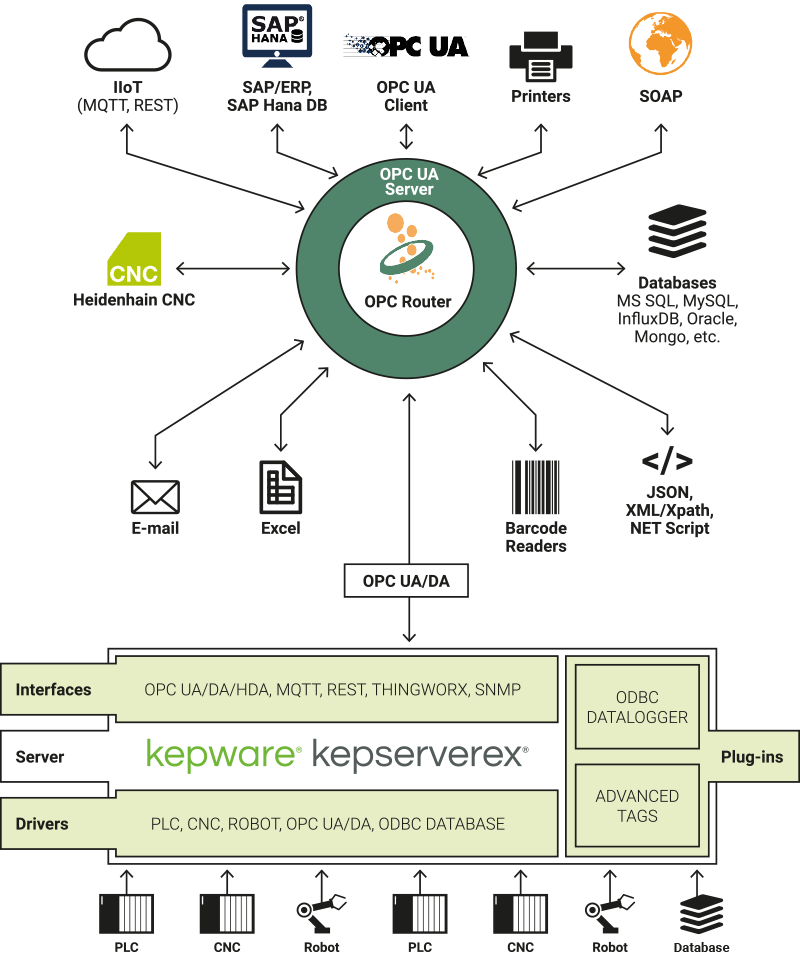 One of the OPC Router's strengths is its ability to mathematically process data. This functionality is invaluable to those who make the right data ready through KEPServerEX and use higher systems only for visualisation (e.g. visualisation, reports and BI views).

When collecting data, it is important to use a standardised solution instead of countless communication interfaces, let alone purpose-built. Both the OPC Router and KEPServerEX are excellent examples of standardised data collection and processing, with both of them supporting horizontal scalability (adding further data sources, for example machines) as well as vertical scalability (data sent to operators, production planners, the CEO, the cloud, etc.).

The following Windows versions are supported:

.NET 4.7.2
(will be installed if necessary). In production environments, we recommend that you manually download and install .NET 4.7.2 from Microsoft before updating. The reason for this is that .NET requires Windows updates, which are not always offered automatically, and sometimes take a long time and may require several reboots. This is not within the sphere of influence of inray. The downtime is kept as low as possible if you uninstall the old versions only after successful installation of .NET 4.7.2. Preinstalled on Windows Server 2016 and Windows 10.


SAP PLUG-in
SAP plug-in supports SAP systems 4.0b or higher, log-on pad must be installed on the OPC Router computer.

Ask for a quote

You must agree that you are not a robot
Please fill in all the required fields.
The email address is invalid.
An error occurred. Your message was not sent. Please contact your system administrator.
Žádost úspěšně odeslána!